Once again, our great friends, the Larsens, arrived for their annual trip to the northern Sabi Sand together with family and friends. Lex and Chris were both there to guide the group, and excitement and expectations were high to say the least!

Safari for Real’s philosophy is to always give guests an intimate experience of the African bushveld. So, as usual we packed simple picnic meals and took them on all of our drives so that we could maximise our time in the bush. 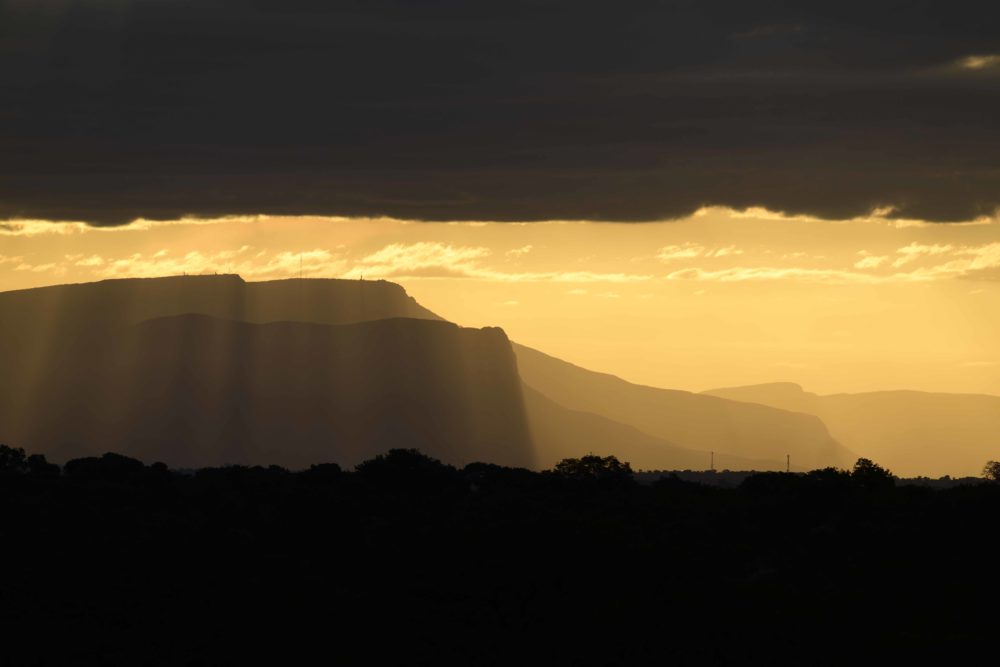 Our very first afternoon drive yielded a great sighting of Thandi and her cub Ribye, who is now 14 months old and bigger than his mother.

This is the time of the year that the male impala are rutting and the bush is alive with the sound of their grunting and blowing as they fight for dominance and mating rights.  The impala are so focused on this that they pretty much forget to look out for predators and many of them get killed.

Sure enough, Thandi had killed an adult male impala which she had stashed under a tree and we spent a wonderful afternoon watching her and the cub feeding, resting, grooming and playing with each other before they both went down to drink at a small seep-line that was still holding water after the wonderful rains that we had in January and February. 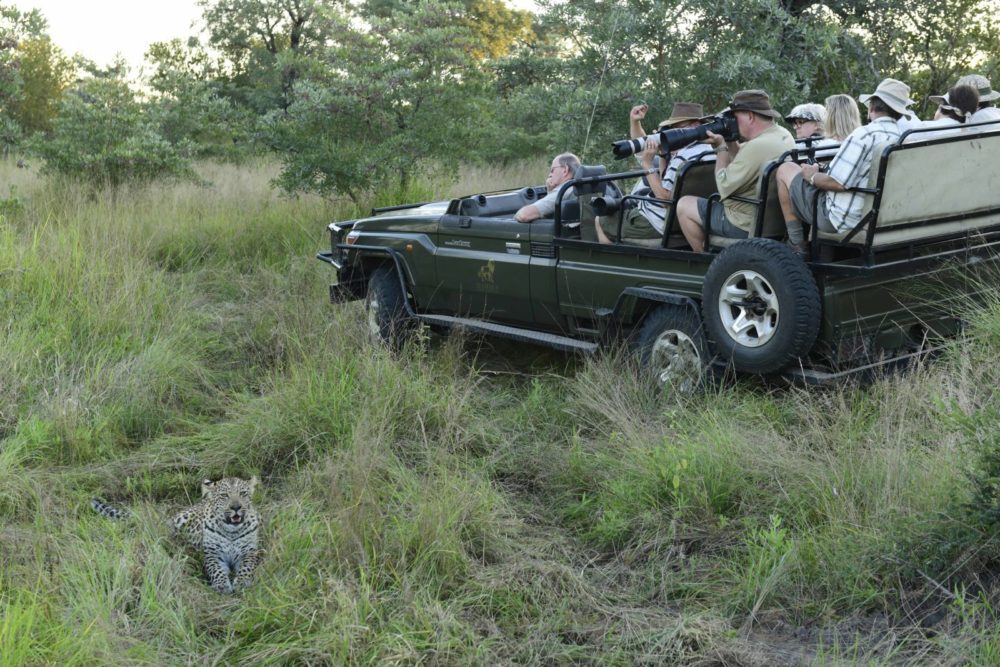 As the sun started setting, we heard lions roaring towards the Kruger National Park boundary, so we decided to head there to have dinner and hopefully locate the lions.  But a few things got in the way of our plans!

First, as we approached the boundary, one of the guests spotted a cheetah lying next to the road and we spent a few minutes watching her.  The lions roared again, so we headed off in that direction only to be met in the middle of the road by a magnificent elephant bull who stood in front of us throwing sand over himself.

We switched off the engine and watched him, the car lights throwing a soft light on him as he dusted himself.  He slowly moved towards the vehicle, throwing dust over himself as he moved and as he got closer, we realised that he was in musth, a condition where male elephants increase their testosterone levels and start looking for females to mate with.  When a bull is in musth it is reputed to be highly unpredictable and dangerous.  By this time the bull had walked up to within 2 metres of the vehicle and it was now much too close for us to start the engine and risk upsetting him, so we just sat quietly, breathing a little quicker and watched him.  Eventually he stopped less than a metre from the vehicle and we could clearly see his penis dribbling as it does when in full musth.

He continued to pick up sand and throw dust over himself and every now and then he would blow vigorously through his trunk, sending clouds of sand and dust over our vehicle and onto the people sitting in the front seats.

He then stopped dusting himself, slowly lifted his head high, and then suddenly gave an almighty shake of the head, sending dust flying all over the place including onto us and then slowly walked off into the darkness, leaving a group of breathless people giggling nervously.

We went off and had our dinner on the Kruger boundary.  We heard nothing more of the lions, who were probably still somewhere in Kruger, but were elated with the start to our safari.

We had many other wonderful sightings throughout the safari including a wonderful hour or so with Hlangula, the dominant male leopard in the north as he patrolled his territory.  He eventually came across a pair of male impala fighting, crouched down in the grass and watched.  The impala stayed focused on each other and moved backwards and forwards, sometimes getting closer to the leopard, sometimes moving further away until eventually the leopard decided that it was close enough and leapt out of the grass and came within inches of nabbing one of them.  The impala ran away to continue their fighting in another place.

One morning, a confusing array of lion tracks was found, going backwards and forwards along the road, disappearing into the bush and coming out on other roads nearby, with no clear direction.  Guides and trackers all had different theories as to which direction they had gone.  Chris was determined to find them, and the guests were happy to stay with him, so in the afternoon he went back to the tracks with the guests and they spent the rest of the afternoon fastidiously trying to work out which way the lions went.  Eventually Chris worked out a direction which led into a deeply incised drainage system with lots of impenetrable thickets where the lions must’ve found a spot to rest for the day.

After a brief sundowner stop he took the guests around the drainage system after dark and eventually picked up tracks of the lions on top of his vehicle tracks.  He quickly followed up and found the lions on the road stalking a herd of impala.  With lights switched off, he and the guests sat quietly, listening and looking at the shadows of the lions in the dark until the bush suddenly erupted with the crashing of bushes and lions growling.  Chris rushed in to find that the lions, 15 in all, had killed an adult male impala and were now fighting each other for a piece. 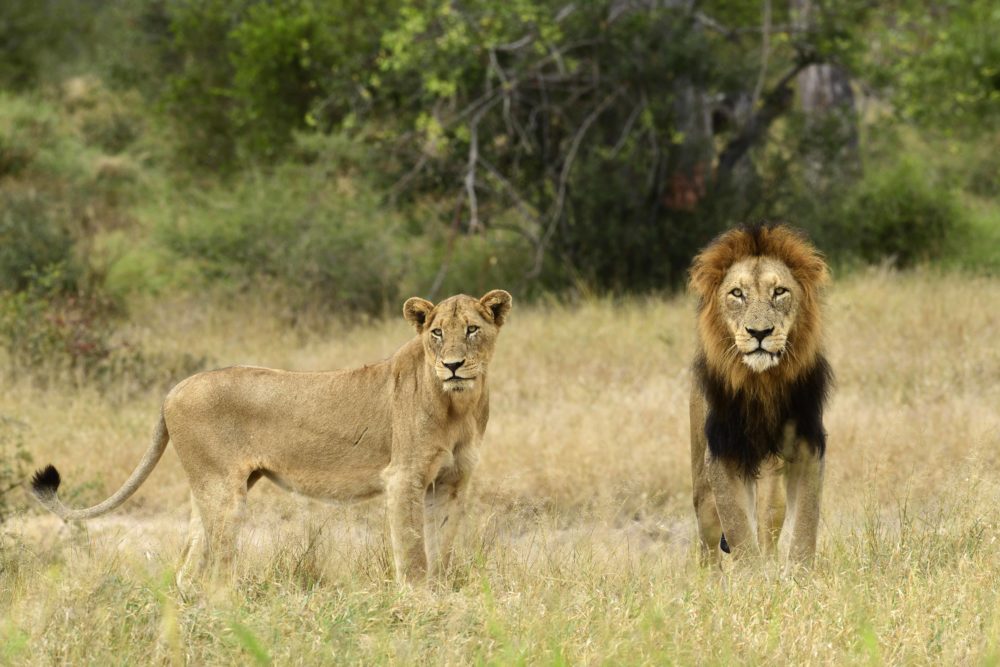 Other highlights included great sightings of a number of herds of buffaloes, one with a male lion following, who ended up getting very close, but maybe didn’t have enough courage to tackle them.  Amongst the buffalo were many yellow-billed oxpeckers, a fairly rare sight in this part of the world, but becoming more common in recent years. 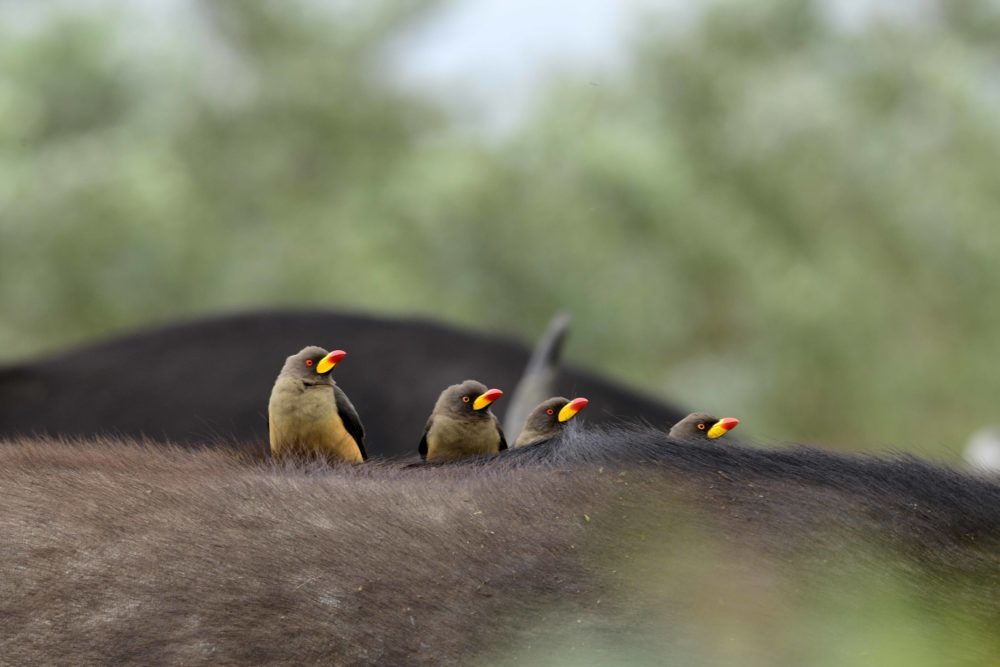 Our safari ended with a morning spent following Thandi, who had now finished her impala kill and was starting to hunt again.  As we sat watching her sitting on top of a termite mound trying to work out where her steenbok prey had disappeared one of the guests excitedly called out “dogs!” and there, bounding past us, was a pack of African Wilddogs on the hunt.  We tried our best to stay with them, but they kept eluding us and then re-appearing until, by following up on their contact call we came across part of the pack feeding on the remains of an adult male impala.  We got there just as they were finishing up and as two spotted hyenas arrived to pick up the scraps.

The dogs left the pack and went off in search of the rest of the pack which had been separated during the chaos of the hunt.  When they eventually met up, the dogs that had fed, regurgitated meat for those that hadn’t, illustrating so beautifully the wonderful social cohesion of these interesting animals.

What a great way to end out trip!

And the group is already making their bookings for 2022!!!

We look forward to having them all back again for more adventures.