Lex has just returned from a trip to the Sabi Sand Game Reserve – undoubtedly one of the best safari destinations in Africa. The group of 10 guests were accommodated at Vuyatela, an exceptionally comfortable and spacious camp with large outdoor relaxation areas overlooking the bushveld, private chalets with plunge pools, and magnificent indigenous trees.

Cyclone Eloise and the related heavy rains have meant that the reserve is flourishing. The area is awash with lush green vegetation and a beautiful array of wildflowers. Even the tiniest of dry streams are now trickling with water, and migrant birds are out in full force, along with big herds of buffalo. With so much nurturing habitat for the animals to choose from, accompanied by the long grass and dense foliage, game-viewing was more challenging than usual, but the guests were still treated to some superb sightings during the course of the week. 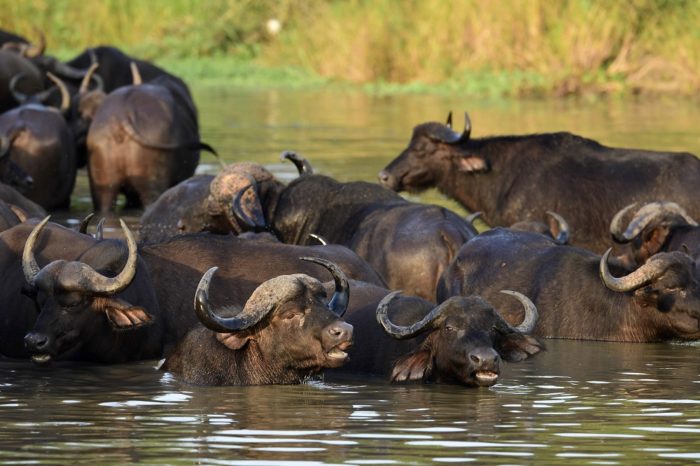 The highlight of the trip was some quality time spent with a pack of 11 African wild dogs, during which the guests were privy to the full range of behaviour exhibited by these endangered canines. We discovered their resting site at the start of the afternoon game drive, and waited until the dogs began their afternoon rituals. Wild dogs hunt mainly in the early mornings and late afternoons, so we knew that there was a good chance that they would start stirring soon. Sure enough, the highly social dogs roused from their slumber, lovingly greeting each other with gentle nuzzles and soft vocalisations, and engaging in playful interactions. 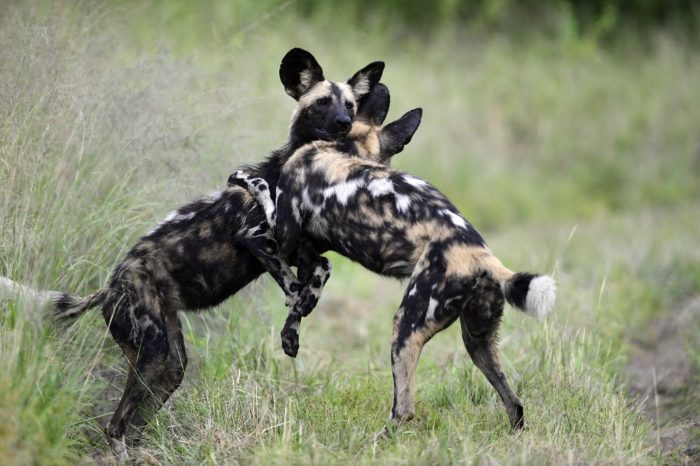 After the socialisation, they began to move off, starting at a slow pace before progressing into a purposeful trot. We were able to follow them offroad through fairly open terrain, watching as they spread out to explore the dense thickets in search of prey. Out of one of these thickets dashed a scrub hare, which was swiftly pounced upon and consumed within a few minutes. With the hors d’oeuvre finished, the dogs resumed their hunt, seeking out a more substantial meal. Suddenly, four of the adults in the pack dashed into the bush at lightning speed, and we were unable to keep up with them. We returned to the sub-adult dogs, who were waiting expectantly at the spot we had last seen them. As the sun started setting, the young dogs pricked up their ears and hurtled off in the same direction as the adults.

After we had spent about 45 minutes stopping and listening, one of the guests noticed the sound of bones crunching. We followed the grating sound and soon came across the dogs feasting on an impala. The teamwork and hunting skills of these incredible dogs is always something exceptional to behold.

Another exciting sighting occurred at night, where we witnessed the renowned bravery of the African honey badger. We were following the Nkuhuma pride of lions, a group comprised of adults and subadults. A rustling in the bush prompted the lions to stop and listen, before two honey badgers emerged, growling and hissing at the big cats. The subadults immediately confronted the two badgers, while the adults stood watching nonchalantly, seemingly aware of the thorny nature of the situation. The badgers stood their ground against the much larger predators, growling menacingly and puffing themselves up, tails flicking into the air. Despite their relatively small stature, honey badgers are well known for their incredible tenacity and courage. But what is perhaps lesser known is a defense mechanism identical to that of a skunk. Turning their backs on the lions, the badgers unleashed a putrid scent which carried into the game drive vehicle and caused the lions to wrinkle their noses in disgust, before rapidly retreating from the scene. 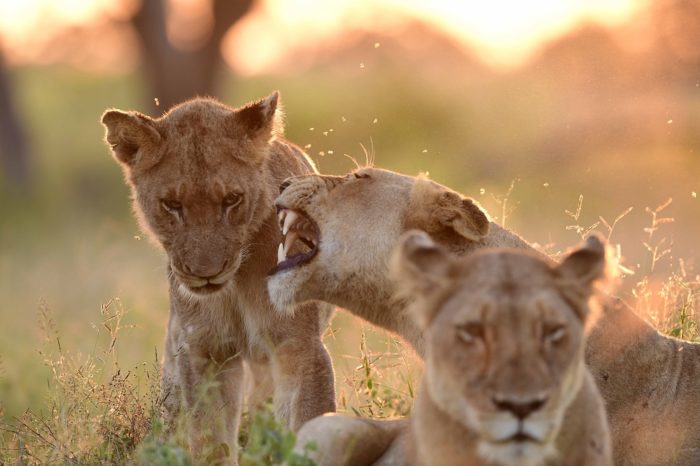 As always, we had some good leopard viewing, including quality time spent with an old, one-eyed female named Nsele. Elephants, buffalo and all manner of other game also featured during the safari.
Returning to the crackling fireplace at night, underneath the twinkles of countless stars, the guests joyfully recounted the tales of their safari, during which they had witnessed some once-in-a-lifetime experienced!

GOOD NEWS!! We have 3 nights available at Tumbeta House in the Djuma area arriving 18 April and departing 21 April 2021. This wonderful intimate camp accommodates 6 guests and has a ground level watering hole hide which allows for great photographic opportunities. Lex is available to guide if you so wish. Please make contact with us lex@safariforreal.com or kim@safariforreal.com if you are interested in taking up this booking.